BGSU Firelands student Miah Pearson '22 smiles while in a classroom on the Huron campus.

Miah Pearson ’22 knows what it’s like to start anew.

By her count, the BGSU Firelands student started college at least four times in different institutions across Ohio and Texas.

Pearson graduated with a Bachelor of Technical and Applied Studies (BTAS) in April. She isn’t alone in taking the non-traditional path to a college degree. The so-called traditional college student – aged 18-22 – is just one part of any student population.

Pearson is a 2009 Sandusky High School graduate. She has a son, Cruz Henson, 6, and is engaged to DaQuez Davis.

“This has been such a journey,” Pearson said. “I feel accomplished because I’ve been working toward this goal. I’ve stopped and started so many things in life, and I was on that route when I started college.”

But this time is different.

“I want to show my son it’s possible regardless of your age to accomplish your goals,” Pearson said. 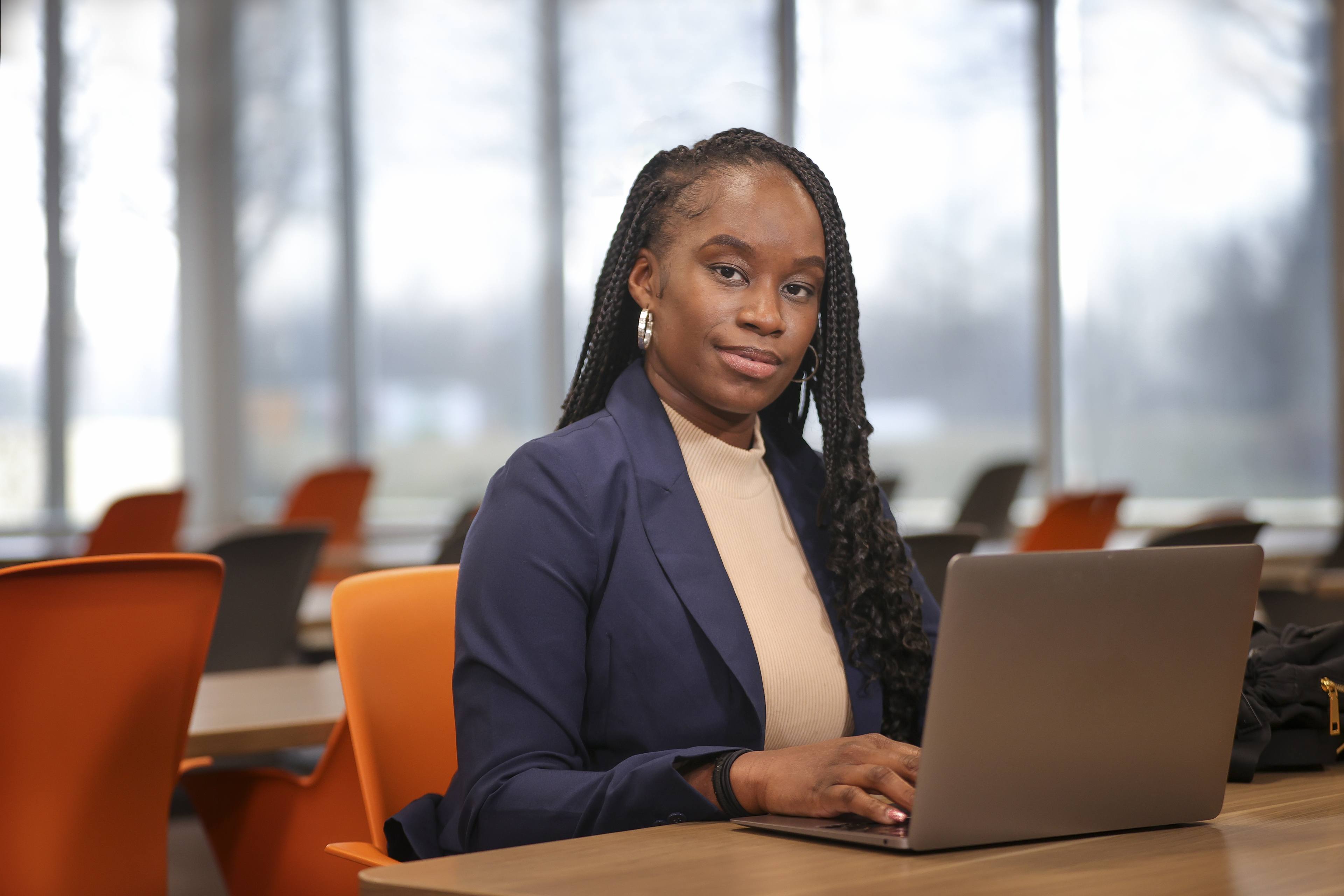 There and back again

Pearson grew up in Sandusky and likes to stay active. She’s a self-proclaimed sports fanatic who played softball, basketball and volleyball in high school. She enjoys craft projects and spending time with family

Clearly the ingredients were there: active, hard-working, and dedicated. But for some reason, Pearson’s experience at Cleveland State after high school, and later at Owens Community College in Perrysburg Township, didn’t elicit the same passion.

“I wasn’t as interested and I dropped out,” Pearson said.

Fast forward to 2013 and Pearson was working two jobs and decided to try something new, which led to her moving to Austin, TX.

Pearson was enrolled at another community college in Texas in 2016 when her son was born.

“After I had my son, it became difficult to continue to provide for him financially, so I dropped out again,” Pearson said. “I tried to stick with college for a year, but I just couldn't do it anymore. Things were getting expensive and difficult to balance, so I decided to return to Sandusky where my family was located.”

That’s when she applied for BGSU Firelands.

Upon enrolling at BGSU Firelands, Pearson decided the time was right to fully commit to college.

“I dove back into school to figure out what I wanted,” Pearson said, noting she had to explore different fields of study to find the right fit.

An adviser told her about the BTAS program, which has a focus in small business enterprise.

“That sounded like a great idea because I knew I wanted to start a nonprofit for kids in the community and, eventually, open my own business,” Pearson said. “I want to be an entrepreneur.”

Pearson worked for an assembly plant for the Ford Motor Company while taking classes at BGSU Firelands. She noted the business program offered versatility and primed students to take on different business roles. It was the perfect fit.

“Joining the Bachelor of Technical and Applied Studies program at BGSU Firelands was the best decision I’ve made since starting my school journey,” Pearson said. “It gave me a sprinkle of everything I needed to be a well-rounded person who learns from different fields and finds what I want for the future.”

Program director Michelle Brodke took an interest in Pearson’s passion and nominated her for an award in the Annual Student and Community Recognition, a college-wide ceremony celebrating the achievements of student and community leaders.

“In addition to Miah’s 3.52 GPA, she is making a difference by applying the knowledge she gained through the BTAS program at Firelands College,” Brodke wrote for the nomination for the Academic Excellence Award. “As her skills have grown, so has her sphere of influence at work. She was promoted from assembly technician to lead line trainer. It is a student’s ability to move from entry level positions to successively more responsible roles that creates upward mobility for our non-traditional students. Miah is now sharing her knowledge and greater understanding of communication, lean management and teamwork at work.”

Pearson won the award and was honored during an April 7 ceremony at BGSU Firelands.

It’s clear Pearson made a positive impact with others at the college. Just ask Jaclyn McLean, an associate teaching professor at BGSU Firelands, who appreciated having Pearson in class.

“I met Miah during the 2019 spring semester while she was taking a biology course; I really appreciated how thoughtful she was in approaching the labs,” McLean said. “Miah had excellent questions about the material, and questions are so important in science. She also had a great attitude in class and with her group members.”

“I understand that Miah was balancing many responsibilities outside of school and appreciated her attentiveness and communication throughout class,” McLean said. “Her determination paid off. She was a wonderful student and a fantastic person to work with these past few years. I’m excited to see what her future holds.”

Hope for the future

Pearson is thankful for support from her family and the BGSU Firelands faculty and staff.

"I’m glad I’m making my family proud and that they’ve stood with me in support on this journey. I didn’t do this alone. Were it not for my mom and grandparents helping with my son, I wouldn’t have been able to complete my courses. I definitely want to thank my family for being so supportive."

Pearson wants to continue to grow in her position at Ford. She has a particular interest in marketing and communication. She also aspires to open a nonprofit to help inner-city children.

“Children are falling into bad activities and not seeing their bright potential because of bad habits,” Pearson said. “I want to help inner-city kids to give back to the community, whether we volunteer to clean parks, put on a concert for the community or something else. Inner-city kids are the future of this community, so I want to give them a chance to find their full potential in a positive environment.”